Launching of the Shopinion platform to the media
06/04/17 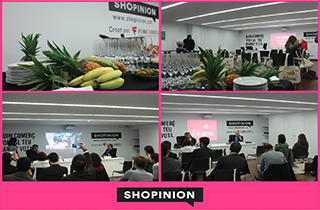 Shopinion, the real estate retail revolution that democratizes the commercialization of Barcelona's premises

• The Shopinion.cat platform promotes active participation to boost the retail business of Barcelona.

• Transparency, active listening and interactive communication are the pillars of this disruptive tool powered by Forcadell.

Shopinion.cat is a participative web platform applied to retail real estate that emerges as a start-up from the consulting firm Inmobiliaria Forcadell. It is a platform that goes beyond the web concept and stems from a business model oriented towards people. The name of the project comes from the merger of "shop" + "opinion", that is to say, it proposes to give an opinion on the retail businesses that are wanted in Barcelona and which are to be decided among everyone involved. Accordingly, Shopinion's premise is: we decide the future of our neighbourhood.

Shopinion is the first step in the new direction that Forcadell has embarked upon and wants to shake up the real estate retail business and integrate it into a city project, maintaining more than ever its commitment to trust and quality by strengthening the customer experience through new technologies. Through Shopinion, a new way of interacting with Barcelona’s retail business is consolidated, based on transparency, active listening and interactive communication, essential values for a good real estate service. With the Shopinion formula, now it is possible to build a viable and adapted commercial offer to all citizens.

The Shopinion.cat project was launched as a pilot test in October 2016 and today it is presented as a totally solid interactive platform that manages to democratize the commercialization process of Barcelona's commercial premises. Today Shopinion is present in all the districts of Barcelona with several active projects. At an interactive level, the platform has more than 150 registered users and more than 1,800 users.

Through Shopinion, the citizens vote for the sort of business they want in the commercial premises of the different neighbourhoods of the city. More specifically, neighbours can participate, to propose commercial activities that they miss in their neighbourhood; the storekeepers, to make a richer, more complete and varied commercial offer in their area; and the owners will obtain a marketing plan that is based on the optimization of their premise 360º. To make it a reality, the Shopinion team has carefully studied the characteristics and peculiarities of Barcelona to make it an efficient and effective tool for all of them.

The Shopinion team is responsible for collecting and analyzing the data and then assigning an activity to each premise. All of this taking into account the opinions of the users, the feasibility of the proposals and the needs of the owners of the premises. The result is a win-win situation: a positive outcome for retailers and for the city of Barcelona. The visual impact of the Shopinion campaign will work as free advertising for the storekeepers and the owners.

As the Shopinion team asserts, commercial trade brings life to the city and the best way to give continuity to this trade is that its citizens decide in each case which is the best option that fits the needs of the people and the neighbourhoods. Forcadell’s extensive knowledge of the real estate sector makes the consultant firm the most suitable adviser for owners and storekeepers and, in addition, its experience will contribute to avoid excessive turnover of local businesses and empty commercial premises.