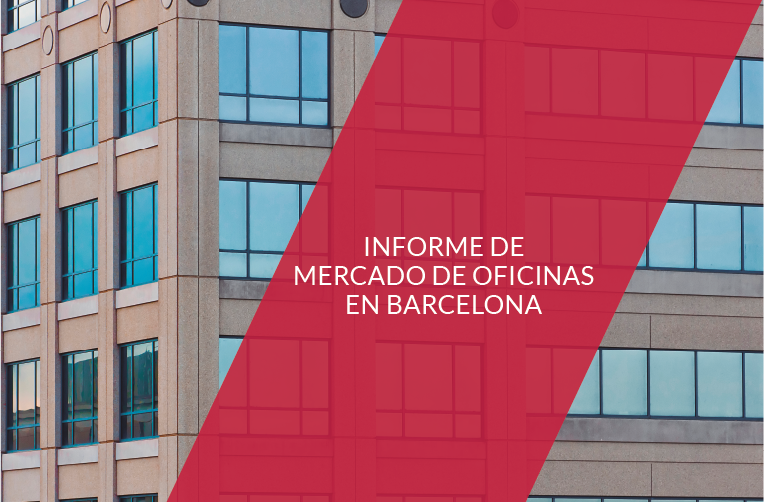 Barcelona continues to face Europe as a consolidated and preferential office market due to the positive economic forecast and the fundamentals offered by the city, like taxes, culture and its warm climate. Since 2015, office take-up has been growing, experiencing a very positive momentum. In H2 2017, take-up volume registered in the Catalan capital reached 143.000 sqm, which amounts to an annual figure of 340.000 sqm, 12, 2% higher respect 2016, and above 2015, a year in which figures reached record levels. The lack of space in Barcelona has driven the last 2 years the office market into the Periphery area, which has concentrated 20% of the take-up volume in 2017.

The rate of availability in Barcelona maintains the compression trend and has gone from 9, 3% in the first semester of 2017 to 8, 8% at the closing of 2017. This progressive decrease of available space is due to the favourable take-up pace and the fast absorption rate registered in the last 2 years, especially during 2017. Availability in Prime remains low, making it increasingly difficult to find office spaces larger than 500 sqm in the 1st Lines. Currently only the 22@ and Zona Franca districts can offer available spaces for large surface demand.

The forecast facing the next financial years is for a progressive stabilisation of the rate of availability and the ending of the compression trend due to new projects that will be launched in the market along 2018, like the D444 building in Prime (3.277 sqm) or the Torre Glòries (36.000 sqm) in the 22@ district. Underline the decline of availability in office markets of the Periphery like Sant Cugat del Vallès.

Office market in Barcelona has closed the H2 2017 with a 9% increase in demand respect H2 2016. Demand for spaces larger than 1.000 sqm have concentrated in the New Business Districts area, specifically in the 22@ and Zona Franca districts, while smaller spaces were found in Prime or Centre Zone. There are increasingly more companies which are opting for new environments and different ways to work, a fact which translates into demand for sustainable spaces, innovative and multifunctional, allowing to work in cooperation providing additional common services and areas. Co-working has conquered large companies and SMEs alike, placing Barcelona as the city with the most co-working spaces in Europe. Demand coming from European countries has increased along 2017 due to the great capacity of the Catalan capital of attracting professional talent, especially in the digital and tech areas.

The 22@ and Zona Franca districts -both New Business Districts-are the only areas which have single owner buildings with available high tech offices in large spaces. The Bcn Fira District complex, located in the Zona Franca district, has turned into the greatest project of new offices in Barcelona in 2017, absorbing more than 70% of the 42.000 sqm of the Gross Leasable Area (GLA), introducing them into the market at the beginning of the year. Sant Cugat del Vallès has turned these past years into the most demanded office submarket in the Periphery of Barcelona, both for investors as well as for promoters. This scenario has elicited that land availability as well as single owner buildings to become increasingly scarce in the municipality.

Average price for office sqm in Barcelona stood at €13,5/sqm/month at the closing of 2017.Throughout the second semester of the year, office rent prices in the Catalan capital have continued to register slight increases in almost all the zones, as has been the tendency for the past 5 years. Average year-on-year increase stood at 8%, identical figure as the one registered in the first semester of the year. This generic increase corresponds mainly to the introduction into the market of new office projects with high tech facilities, sustainable qualifications and therefore, higher prices than the average of the market.

Barcelona registered slight sale price increases in all the zones, with the square meter standing at €2.952. Y-o-Y increase in the second semester 2017 stood at 5,4%, therefore the average price in Barcelona went from €2.800/sqm in the H2 2016 to stand at €2.952/sqm in H2 2017.Price evolution for 2018 forecasts the growth trend will continue due to rising demand and lack of space.

The positive forecast shown by macroeconomic indicators and the fundamentals of the Spanish office market have turned Barcelona and Madrid into preferred destinations for REITs and international funds. In fact, both cities have gathered 95% of the total volume of investment registered in 2017, a total figure of €2.455m. Madrid and Barcelona, in addition of offering quality product to investors, stand out for their lower prices, considerably lower than the rest of European capitals. Prime yields stretch in the range of 4, 5-5%, while, in the 2nd and3rd Lines, they stand around 5, 5% and 6% respectively.

Office market in Barcelona will maintain investor interest in the next few years. Increasingly, these market players are demanding at least the basic building qualifications, since it has become an essential requirement for companies when they settle into anew working space. In addition, international funds specializing in full building rehabilitation have become interested in the Barcelona market, a tendency that will increase throughout 2018-2019.

International investment continues as the main drive of the office market in Barcelona. In the 2nd semester of the year, there has been an increase of large players like REITs and international funds, in contrast to the slight decrease of the involvement of family offices and small investors, especially in the 4th quarter. The 22@ district attracted most of investors’ interest in the 2nd semester 2017.

Among the transactions that Forcadell has brokered in H2 2017, underline the rent by Regus of an office building in the centre Zone for its location and surface (3.800 sqm). FORCADELL also advised the Servei d’Ocupació de Catalunya (SOC) in renting a 2.006 sqm space in the Torre Meridian building (New Business Districts, NDN). The transaction for the rental of the exclusive Enric Cera villa stands out for the relevance of the building: a villa built in 1914 of 1.234 sqm for the Italian fashion brand Max Mara to settle their headquarters and ample showroom.